Lisa left in the morning to drive to Green River to spend the weekend with friends, while I worked all day.

Worked all day, then Sean flew in to stay for a few days and we had a relaxing evening.

Sean and I left around 8:30 to go skiing. It had snowed a lot overnight and there was nearly a foot of snow on the valley floor, making driving difficult. We were making reasonable progress, and then the Jeep broke down — the engine kept dying while driving and was very hard to restart. We got off the highway and made our way to a mechanic, with me having to push the car part of the way. We left the car in the garage’s parking lot (it was closed, being Sunday and all), got an Uber home, went for groceries (itself a bit of an adventure) and hung out the rest of the day. Bleah. Worked in the afternoon, then Lisa came back from her trip and we had a nice dinner with pizzas and champagne.

Sean and I left in the morning to tell the garage about the Jeep and then go skiing. Traffic was backed up due to a closure that had ended recently and it took us an hour and a half to get to a park-n-ride and take the bus up to Snowbird. The resort wasn’t too crowded though and we had a good time skiing most of the day, both feeling pretty tired at the end. Picked up the Jeep on the way back (the problem was a bad sensor so didn’t take long to fix) and had a nice evening at the house.

Worked and rested all day, I had some pain from what seemed like a mild case of pleurisy and needed to take it easy.

Mostly just worked, some time at the aviary and jogging but that’s about it.

Went out skiing in a break between two storms. Parked at the cardiff pass trailhead and did a couple laps, down Flagstaff’s shoulder and then Toledo bowl. Sunny conditions, great snow, wonderful time and great for clearing the cobwebs out of my head. 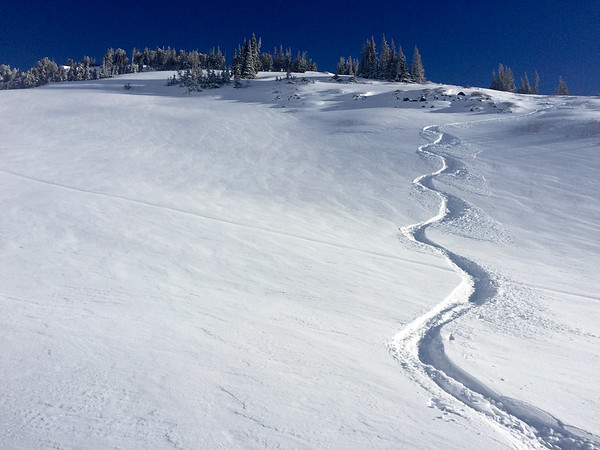 Worked and prepared for our upcoming trip.

There was a bigger dump of snow yesterday and went skiing at USA bowl. Did four laps in the bowl in more great conditions, got a little cold but had barely enough layers to continue having fun.

Went skiing from the cardiff pass trailhead. I did a couple short laps on the south side of cardiff pass itself in wonderful blower powder, sinking to my thighs on each turn. Afterwards I did a longer run off Little Superior, but it took a while to get there and I didn’t start skiing down until probably 10:30. With the sunny and warm conditions the snow was warming rapidly — between setting off warm sluffs that cleared the upper parts of the run of good snow and hitting a lot of rocks early on, the start wasn’t great, but lower down the snow improved (still sun-damaged) and had a fun time skiing out the rest of the way. 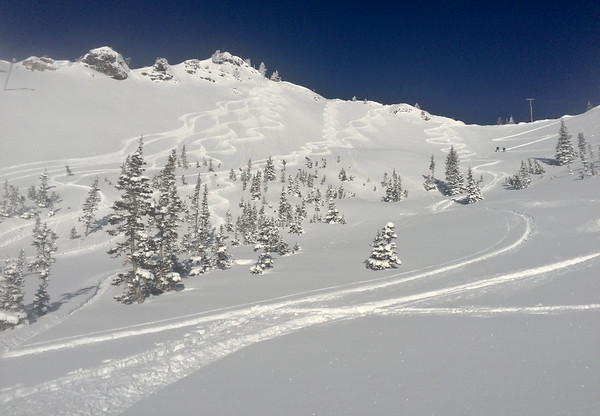 Relaxed, worked, and prepared for the trip.

Left in the late afternoon for the airport to start heading to French Polynesia. Ran into a problem right at the start; we’d checked the airlines’ websites and information about our itinerary and were packing based on that, including a surboard in a bag. At checkin we were told there was no way we could get the board on the plane, but had a friend come by and pick it up so we didn’t have to throw it away (thanks Heather!). Had uneventful flights to LAX and then Papeete, arriving the next morning.

On our last leg to Raiatea we ran into another checkin issue — restrictions on carryon weight and overall baggage weight were very different and more restrictive than what the websites had led us to believe. We had to repack a lot of stuff but things seemed ok after that. I’m not sure what to think about the issues we had checking in for this flight and the one on the previous day. There is so much bogus information on the internet, even from the carrier’s own websites, that at a minimum we need to call to get the actual limits on our flights, and even then I’ll think twice before trying to bring another oversized piece of luggage on a plane. Anyways, after flying in we got a rental car and made it to Magic with all our luggage. The boat was in great shape thanks to our boat watcher, and we spent the day unpacking, adjusting, and planning the following days.

Notes for corrosion, mold, spoilage after 9 months on the hard in a rainy and humid environment:

– Cans in the pantry were very rusty, but cans in cabinets or in cloth boxes were OK.
– Exposed tools in tool cabinet were pretty rusty (not terrible), cabinet was moldy too (door was closed).
– Tools in boxes were in good shape.
– Paint can in ziploc bag was in good shape.
– Writing room hatch seemed to have a small leak, and pillows and headliner were moldy.
– Laundry in plastic bags had a light mold smell but otherwise was fine.
– Distributing gear so that the boat cleaner can get to all the bunks would be good.

We were planning on launching the following day so didn’t have a lot of time to work on the boat while it was still out of the water. We had a welder come by to repair our outboard hoist, and I spent most of the day painting a new bootstripe on the boat and touching up the paint near the waterline.

I got up early to check the engine fluid levels and starters, and to debug our stove, which wasn’t lighting (it turned out to be a closed valve under the sink). We got in the water in mid-morning, a smooth and low-stress launch using the yard’s tractor, and motored to a nearby mooring. After getting the dinghy in the water I found all the gasoline we had was varnished, so we rowed in to shore and drove to town to get some fresh gas. I eventually got the outboard started and did some more work getting the watermaker ready to go.

I continued recommissioning, getting the watermaker running and some other stuff. Much of the midday was occupied by dealing with the dinghy; when I started the outboard yesterday I never put it in gear, and when I tried today it was difficult to shift and I managed to break some of the shifting components while trying (I wasn’t being all that aggressive I thought, the outboard broke pretty easily). After bringing the motor aboard and removing the lower unit I figured out the problem was a seized rod in the unnecessarily-complicated shifting mechanism, and after several hours of disassembly, lubricating, and some blowtorching, got it unseized and then reassembled. I was able to run the dinghy in gear, though had to shift by taking off the cowling and turning the control rod with a small wrench. Blech. In the late afternoon we went paddleboarding among some small nearby bommies, fun times seeing the fish again and spotted a couple neat orange and black morays.

Mostly recommissioned, fixed some things on the boat, and provisioned in town. Lisa tried out her new camera while snorkeling with the moray we saw yesterday; I kept her company on my paddleboard and spotted an eagle ray in the shallows on the way out.

More recommissioning in the early morning, then we took our rental car and drove around the island, taking about three hours. This was pretty mellow, the road mostly just follows the coast, lots of homes dispersed along it. Great views of the lagoon and interior mountains. The only place we stopped for long was Taputapuatea, historically an important cultural site in Polynesian society. All that is left are several marae, courtyards of coral rocks. In the afternoon I did some engine repairs — installing a larger bolt to secure the starboard alternator (the smaller one I installed last year after the original broke has itself broken several times), and unsuccessfully attempting to jury rig a new shifter for the outboard. 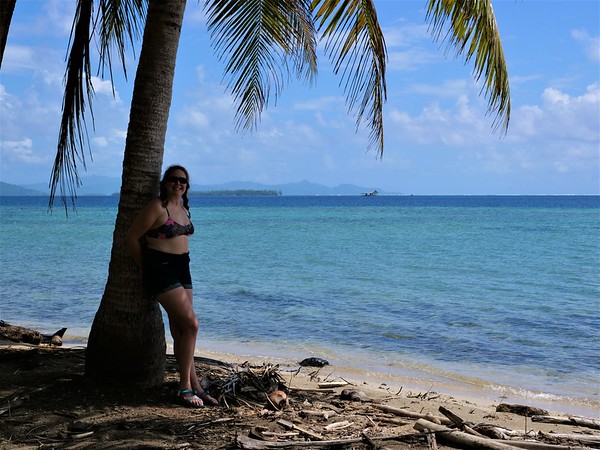