I went out with Lisa and we tried doing Led By Sheep again. We had fun going up to the saddle between Aires Butte and South Ariel, and did the first pitch of Led By Sheep, but Lisa was still feeling a little sick and exposed so we turned around. In the afternoon we drove up to SLC. 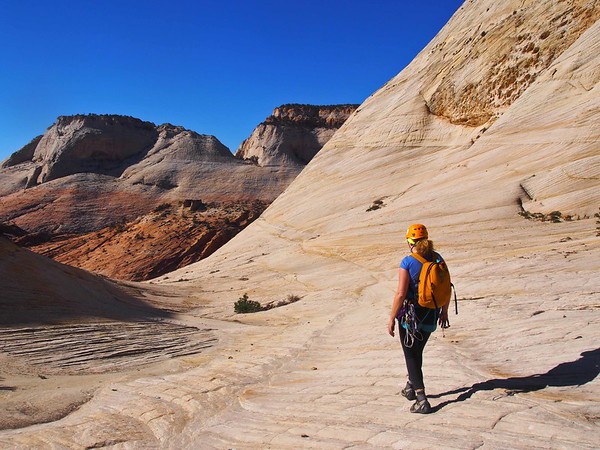 Worked most of the day, went to an event at the state capitol building opposing the reductions in the grand staircase and bears ears monuments.

Did some jogging in Liberty Park and errands, otherwise worked.

Went backcountry skiing in the morning, leaving from the upper Solitude lot, around Willow Knob and up to the top of the West Monitor run. I did a couple laps there, with great snow conditions, then returned. Very low snow and the skiing on the way back in Main Willow was awful, with lots of brush and logs fully out of the snow. Oh well. 3k feet of climbing. In the evening we had a great party at the house with a bunch of friends coming over for homemade pizza and such.

Worked most of the day, had a nice evening movie/dinner with Lisa and Everett.

Did some skinning and skiing with Lisa from the Grizzly Gulch parking lot at Alta. We went up the road there for several hundred vertical, lots of other people around, before skiing back. We were both trying out new gear so it was good to keep things mellow, and fun skiing back down the road.

Travelling to Austin for work.

Travelling back to SLC, then some jogging around Liberty Park and work.

Worked all day, except some jogging at the park.

Worked all day, except some slacking off in the morning.

Tried to go skiing, drove up to Grizzly Gulch and then noticed that my pack, with all my apparel and associated skiing gear, was gone. Apparently it was stolen out of the car sometime in the past week. So no skiing, drove around town replacing most of the gear and then did some work.

Went skinning with Lisa from the Grizzly Gulch parking at Alta, heading nearly to the top of the Sunnyside lift before skiing back down the road. Then some errands around town, and a little work.

Went backcountry skiing by myself from the Grizzly Gulch parking, heading up into Grizzly Gulch proper, Twin Lakes pass, the saddle between Mt Wolverine and Mt Millicent, Mt Wolverine proper, then back to Grizzly Gulch via Catherine’s area in Alta. Around 3k feet of climbing. Good skiing on faceted snow in places, and enjoyed how light my new skiing setup is, pretty easy to get around even in difficult terrain. Had problems twice with one of my skis escaping while doing a transition; they don’t have brakes which makes it really easy to lose them. I recovered them both times, with damage to the tips where they hit rocks. Need to get a leash system in place.

Great day of skiing from Grizzly Gulch. I headed up to the gulch, did a couple laps on the north face of Patsy Marley, three laps from various points down into the Twin Lakes basin, then a final lap from Patsy Marley back to the parking lot. Maybe 4.5k of climbing. It had snowed 6″ or so the previous night, and was still snowing in the morning before clearing up to sunny conditions. Despite the thin snowpack the skiing was great, plenty of rocks around but not too troublesome.

Skinned from the White Pine trailhead up to White Pine Lake, and then skiied back. Nice weather and great views but the snow was too thin for any skiing up in the terrain surrounding the lake, and then trail had lots of rocks just under the snow surface which made getting back to the trailhead a pain. 2.5k of climbing.

Really nice day of skiing from Grizzly Gulch. Got to the trailhead around 7am, went up to Twin Lakes pass and did three laps on the east side of the pass followed by a couple laps in the trees. It snowed all day and winds were strong from the west. Skiing was better on the east side with what felt like a foot of fresh powder, but also unstable — I looked for lower angle areas to ski but still set off a couple soft slabs on one of the runs. 3.5k of climbing. Christmas party at Jane’s house in the evening.

Worked in the morning, then Sue and Tim arrived from Phoenix to stay for several days.

Christmas! Relaxing day, then a nice dinner with Lisa, Sue, Tim, and Malia.

Spent most of the day skiing at Alta with Sue and Tim, fun times and good snow.

Spent most of the day skiing at Solitude with Lisa, who made a lot of progress with turning and being comfortable skiing faster, lots of fun.

Worked and relaxed all day. Sue and Tim flew out in the afternoon.

Worked and did house projects all day.

Worked most of the day. Lisa left around noon to head to Freezefest, while I did some jogging in the park.