We continued having conflicts about our different levels of interest in climbing. In the morning I realized that I could go out climbing alone, both on lead and top rope (which I’d done a little bit of in the distant past). We talked about this and how it could address both Lisa’s desire to not be pushed into the sport and my desire to progress further (I’m particularly interested in eventually using this to safely climb class 4 and easy class 5 alpine routes, which is a big stretch for Lisa). Later on we went to a reindeer farm near town (very interesting, they were fun to feed) and I did some ground school practice with Lisa in a bouldering area to practice with the solo climbing system. 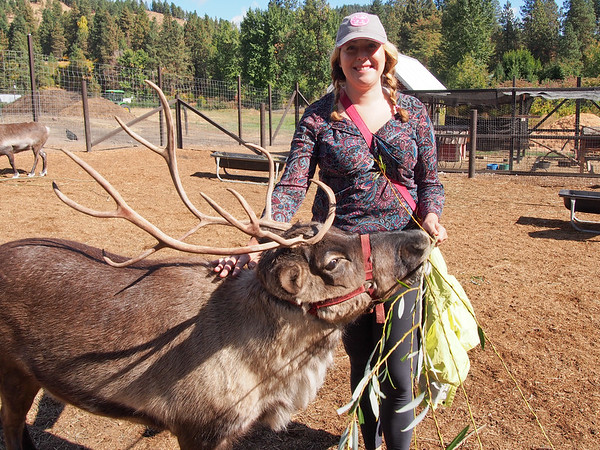 In the morning we tried and failed again to get an Enchantments permit, then rested the rest of the day, getting a hotel in Leavenworth to get some relief from the stress and to facilitate the plans for tomorrow.

I left the hotel a little after 3am, drove to the Snow Lakes trailhead (the other end of the Enchantments traverse from the Stuart Lake trailhead) and started hiking around 3:30. After passing Nada and Snow Lakes I reached the start of the enchantments around 9am, then hiked through the lower enchantments. I left the trail around 10:15am, summitted Little Annapurna at 11am, followed the ridge west and summitted Dragontail Peak at 12:30am, then backtracked, made my way to Aasgard Pass and started down at 2pm, arriving at the Stuart Lake trailhead a little after 5pm and meeting Lisa there. This was a superb day hike with beautiful larches and lakes in the enchantments, relatively easy off trail travel to the peaks and first class views. The ridgeline to Dragontail was especially nice with hundreds of small birds around feeding, along with a grouse halfway to its winter plumage. There were several habituated goats in the lower enchantments as well. 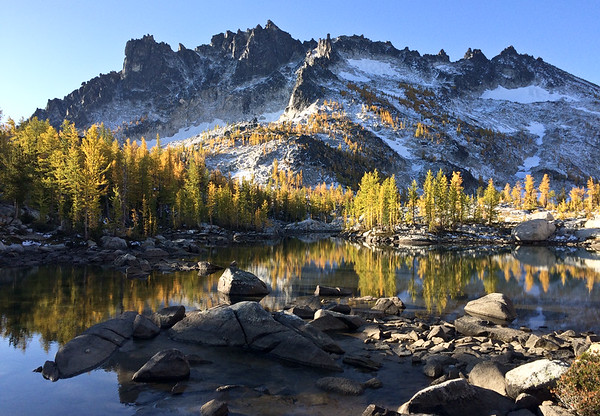 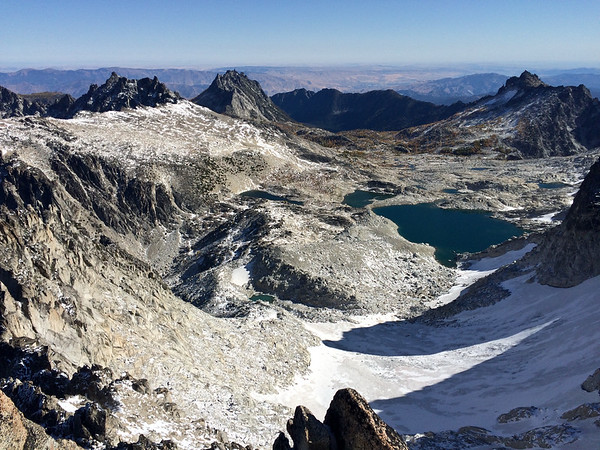 Lisa got a backpacking permit for a few nights and we started our way up the trail again. We ran into Mark, a friend from Boise we hadn’t seen in years, then we retraced our steps to Colchuck Lake and up to Aasgard pass. Despite the heavy packs we made good time and felt strong (I wasn’t too sore after yesterday either, the hike we did the previous week improved both our conditioning quite a lot). We camped in the upper enchantments not long after the pass.

We had a very cold night with poor sleep, but woke to great views. We took our time in the morning, made our way down to the middle enchantments, then summitted Little Annapurna together, enjoying the wonderful views both to the south and of the entire enchantments basin. We returned to our packs, continuing down the trail, spotted a few mountain goats, enjoyed the lakes and larches, then got off the trail and camped near Crystal Lake.

We slept better after making some sleeping bag adjustments, and not long after waking in the morning five mountain goats visited the camp to eat the gravel we had peed on during the night (yuck). They were fun to watch though and started grazing on a nearby hillside afterwards. It was kind of gray and there was some wind and we started hiking out, with the sun eventually coming out and warming us as we went through the lower enchantments and spent some time seeing the lakes and larches down there. We made our way down past the Snow Lakes and Nada Lake but camped at a site not long afterwards.

It rained during the night and we were glad to be below the snow line. We hiked the rest of the way out in the morning, got our taxi back to the van, then went to the Oktoberfest celebration in Leavenworth, dressing up in Lederhosen and a Dirndl which Lisa had bought the previous week. This was pretty fun, we were hungry after the backpack and the beer was tasty too, live music and we did a bit of dancing. We left in the afternoon and had a relaxing evening camping in the van.

After relaxing in the morning we did a short trail run in town, then Lisa went shopping while I went out solo climbing for the first time, going to playground point and leading / following two pitches which I’d done previously (5.5, 5.6).

In the afternoon we did a bike loop from the town’s ski hill, climbing on a new trail, doing part of the Freund Canyon trail, then returning via the Lost Boys trail.

In the afternoon I spent five hours or so solo climbing at domestic dome. I did a two pitch lead on easy terrain (should have been one pitch, I just didn’t bring enough rope initially), then did a lot of top roping (5.5-5.9) to work out a system for getting the microtraxions to feed automatically.

We repeated the bike loop from the town’s ski hill, then I did some more solo climbing at playground point. Two leads (5.6, 5.8), trying out some ideas I’d had to make the rope feed better through the grigri. 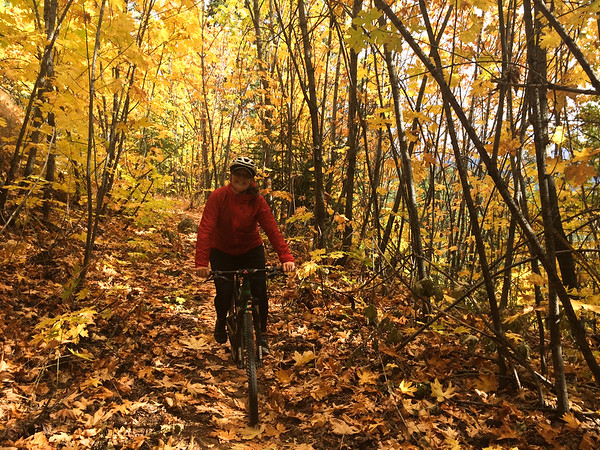 Relaxed most of the day, some hiking in the town park, then an excellent dinner at the Watershed restaurant.

Climbed with Lisa at playground point. I did a solo lead on the 5.6 I’d been on before to show her the system, then we set up some top ropes on 5- and 5.6 and had a great time climbing those together.

Climbed with Lisa at peshastin pinnacles. I tried leading a 5.9 but bailed out very early, then led a 5.5 and top roped with Lisa at sunset slab, really fun. I did a couple more pitches on top rope at the Martian slab but the rock there was pretty crumbly.

Did the bike loop from the town ski hill, then left Leavenworth and drove to Seattle to stay at an Airbnb.

Flying to Lisbon for work.

In Lisbon for work.

In Lisbon for work.

Flying back to Seattle.

Walking around Seattle and shopping, then went to Bainbridge island to see Brad and have dinner on his new boat.

Drove to Boise, arriving an hour or so after dark and moving into the vacant unit at the duplex. It rained all day, and snowed around the passes.

Kind of gray during the day, did some projects at the duplex to prepare for painting — removing busted gutter and trellis.

Biked a loop in the foothills via Kestrel Hill and Hulls Gulch, felt super strong and had a great time. Afterwards helped Lisa with removing old cables from the duplex for the paint job.

Did a few more prep jobs at the duplex, but painting seemed under control and in the afternoon we drove to the City of Rocks and found a campsite there.

Trad climbing class with Brad from Sawtooth Mountain Guides. Had a great time, practiced building anchors and placing gear on the ground in the morning and did a couple mock trad leads (5.6, 5.7) at Window Rock and then followed on Snakes and Ladders (5.9) at King on the Throne, fun climb.

Went climbing at Castle Rock most of the day. In the morning went with Lisa and lead the first pitch of Big Time (5.7) on the rock, then went to Hostess Gully and lead Poking Holes in the Firmament (5.6), really great juggy route. Did a couple of topropes next to that, then after lunch went and solo’ed all of Big Time, which took a little over three hours to climb four pitches and rappel back down. Had a great time, everything went smoothly, the climbing was easy and there were great views at the top.

In the morning I went climbing by myself and did a solo trad lead on Intruding Dike (5.7), nice climb but I was farting around with all the trad gear which made things feel pretty hard. After that I did a solo trad lead on the nearby Breezeway (5.6), kind of awkward but good, then Lisa joined and we did some toproping there. In the afternoon we went to Hostess Gully at Castle Rock and did the first pitch of Fruit Pie (5.7), great climbing on patina but tricky lower down, and I did a solo lead on one of the climbs at the nearby Egg Wall. Afterwards we biked around Castle Rock for a bit, really fun and full day.

In the morning I did a couple solo trad leads (5.6, 5.7) at Window Rock, the same ones I did during the class. Afterwards Lisa climbed the second route, and we walked around on top of the rock, enjoying the window and the great views. We went to the hot spring in town afterwards and returned to Boise.

Spent the day working and shopping.

Worked on the duplex (reinstalling gutter), then we went biking on the Kestrel / Hulls Gulch loop with Lisa, had a great time.

Worked most of the day, nice evening with Lisa, Erik, and Dexter at the duplex and a nearby restaurant.