We got to Logan Pass early and hiked together over Hidden Pass to Hidden Lake. From there I continued alone up to the north summit of Bearhat Mountain, which was a really nice route with little scree compared to Piegan and good secure scrambling.

We left Avalanche campground, which was being closed due to a nearby fire, then drove to Logan Pass in the morning to try to climb Mt Oberlin. The trail was closed due to NPS bullshit (a water pipe being worked on is under the trail I guess), so we left Glacier entirely and drove to Canmore in Alberta. In the afternoon we went for a bike ride on the Orange loop at the Nordic Center, which I enjoyed a lot but was pretty technical and took us a while to ride. Afterwards we drove around for over an hour looking for a place to boondock, but everything was locked down pretty good. I was getting pretty upset, largely due I think to dealing with the NPS earlier in the day, but eventually we gave up and got a spot at a campground.

Great hike on Ha Ling Peak in clear conditions. Very crowded due to it being Labor Day, but we had a lot of fun and it was great climbing a peak with Lisa. Afterwards we camped at the Bow River campground.

Lisa dropped me off at the nordic center in the morning, then took the van to a shop to have its brakes looked at (a brake maintenance light kept coming on). The shop took a while to do its thing and I was biking from 10 in the morning until 4:30 in the afternoon. I did the long loop at the center first, which had too much doubletrack and kind of sucked. After that I did the green and blue loops, and then the orange loop three times, which was really nice and a great trail for me. I ran out of food and water but managed the situation ok. We camped at the Bow River campground afterwards.

It was really smoky and we continued on to Lake Louise to camp. We did a trail run / hike on the Bow River loop and a had a relaxed evening.

Our anniversary! In the morning we drove to Moraine Lake, arriving a little after 7am but finding the parking lot a zoo already. We still found a parking spot and then hiked to Consolation Lakes, which was very pretty even though it was still pretty smoky. On return we hiked to an overview of Moraine Lake, which was very pretty too, and in the afternoon took the Gondola up at the ski resort in town. We had our anniversary lunch at the top, which was very nice but offered limited views of the area due to the smoke. We camped again at the Lake Louise campground.

We slowly drove north on the Icefield parkway, which was pretty though still smoky. We arrived at Wabasso campground south of Jasper, finding poor visibility due to the smoke and some rain, so hung out the rest of the day.

It was kind of rainy in the morning, but we drove to Jasper and did a nice loop hike from town that visited several lakes. We tried to do laundry in town but it was very hard to find any place to park, so we had lunch and went back to Wabasso campground.

The rain stopped and the smoke cleared out. We got up early and drove south back down the Icefield parkway, seeing all the peaks we’d been missing the previous days, now with a fresh dusting of snow as well. Gorgeous views. We went for a short hike at the toe of Athabasca Glacier but did not go on the glacier due to some forboding signs. Afterwards we did the Parker Ridge hike, finding great views, a cold and biting wind, and light snow. We continued driving and camped at Lake Louise for the night.

We got up early, drove to Lake Louise itself, then hiked up Mount Fairview together. This was a great hike, really nice views of the yellow Larches from the trail and a side peak (Saddle Mountain) that I went up. It was very windy at the saddle and on the hike up to the summit of Fairview, but we persevered and had great views of the plain of many glaciers and the surrounding peaks that we’d been missing on our earlier trip through this area. We camped again at Lake Louise.

We drove to Revelstoke in the morning, had a lunch in town and then I went biking on some trails in the MacPherson area south of town. I found some very challening blue trails and then some really nice flowy stuff on the Flowdown trail. After biking for a couple of hours I returned to the van and we went to a campsite near the Flowdown trail which I’d noticed, and went biking together on an out-and-back on much of the Flowdown trail.

Rest day, we moved camp to a spot on the road to Frisby Ridge but didn’t do much else.

After a morning of working we got a late start and drove to the Frisby Ridge trailhead, then started up the trail. This is a great trail but as we got close to the top of it we both got cold and it was getting late in the afternoon so we turned around. We camped at an awesome spot near the trailhead with expansive views of Revelstoke and the neighboring mountains.

We kept the van at its spot all day, mostly working, though I went out alone and did the Frisby Ridge trail again, going to the top and then on to the lake a little bit afterwards. Great time.

We got an earlier start than our first attempt and went up Frisby Ridge together, visiting the top and then doing the little lariat loop around the summit before returning. Great views of the surrounding peaks, it was really nice to ride around in the alpine areas with Lisa. We went back to Revelstoke for pizza and then camped at the Martha Creek campground north of town.

In the morning I biked up the logging / service road heading to the Martha Creek trailhead, then went down the Martha Creek trail. This had a solid 5000′ of climbing with a great and very technical descent and took a little over four hours total. While I was doing this Lisa drove back towards Revelstoke to hang out, then we met up and drove down towards Washington (rainy weather was coming in and we wanted to move on to drier areas). We drove through part of the Okanagan Valley, finding lots of sprawling dumpy towns, farmland, and finally a nice campground next to a lake.

We drove into Washington, and did some errands on our way to Leavenworth, where we camped near the river a little ways west of town.

We hung out at camp most of the day, doing some light hiking/biking along the river.

We drove to nearby Freund Canyon and did the bike loop there. This is a great trail, buttery throughout, with a well graded ascent and then banked turns and berms almost all the way down. Found a great spot to camp in the van near the trailhead, which we used for most of our stay in Leavenworth.

Rested most of the day, though I did the Freund Canyon loop by myself.

We went out climbing, for the first time in nearly four years, top roping at barney rubble (a roadside crag) and later on a little bit at playground point.

We went out climbing together, top roping at roto wall and domestic dome. The former was nice, the latter was kind of tricky as I had to do some scrambling in sandals on rocks covered with pine needles. I understand now why people use approach shoes.

Rested most of the day, though I did the Freund Canyon loop by myself.

In the morning we tried and failed to get an Enchantments backpacking permit, rested the rest of the day.

We had a narrow weather window so instead of trying for a backpacking permit again we went day hiking from the Stuart Lake trailhead, making it to Aasgard Pass and spending an hour or so before returning. The high country was beautiful (we also saw a bear early on which another hiker pointed out) but the hike was a real ass kicker. We did over 4500′ of climbing with half of that going up the steep and sometimes loose and hard to follow route to Aasgard Pass. We hadn’t been doing any serious hiking previously and were very sore as we returned to the van 12 hours after we started. 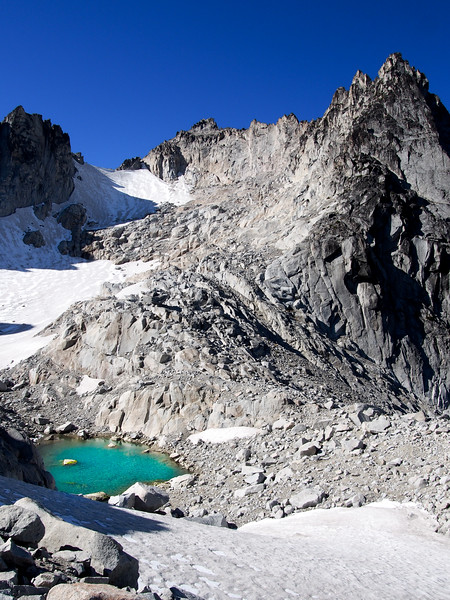 Rest and recovery day in Leavenworth.

We went climbing together at playground point, top roping some 5.5/5.6 routes. I had fun, but Lisa felt pressured into the climbing (which I wasn’t trying to do, but may have happened anyways).