We moved around a lot last summer. After spending a continuous six months on the boat, we returned to Arizona a little before Memorial Day, rested a few days, flew to New Jersey for a few days, drove around Arizona and Utah for a couple weeks, flew to London for a week (just myself, for work), flew to Alaska for a month, drove around Utah and Idaho for a few weeks, then drove around Colorado for a month before finally settling in place in Utah in early September.

Some of this traveling was really great, but a lot was less happy-go-lucky road trip and more just plain exhausting. We spent too much time staying in hotels in urban areas, and the van was hard to live in. It had too much stuff in it, like a life raft we’d brought up from Mexico to have serviced and, later in the summer, some large things pulled from storage in Boise.

This sort of living wore away at us pretty quickly, and early in the summer we realized we needed a new strategy. In particular, we needed a home base, a place of our own. There were several reasons for this. We could store excess equipment and things there, to declutter the van while we were on the road. We could spend time there to relax and prepare when transitioning between the boat and a land based lifestyle (shopping for things for the boat can take weeks). We could stay there in the winter. We spent the previous two winters on the boat, but we are planning to sail to French Polynesia this spring and spend the next few years sailing the south pacific during the austral (southern hemisphere) winter, when hurricane danger is low; this means we’ll be back in the US during the boreal (northern hemisphere) winter. While there are van travel options in warmer climates during the winter (we especially want to continue to spend time in Mexico), we didn’t want to flee the cold weather entirely. I missed being around snow, and I especially missed skiing.

We had a couple of questions to deal with. Where should this home base be located, and what sort of place should it be? This wasn’t the first time we’d looked for property; the previous summer we had looked around a bit in Durango and Bend, but found both markets pretty overheated. In the end, the only really good option we saw was Salt Lake City. The great mountains nearby and the many friends we have in the area were the main advantages, but logistically it’s also nice to have a well connected airport and to be reasonably close to the areas we love in southern Utah and Colorado.

Finding a suitable home proved to be more challenging. Our main requirement was that it needed to make money for us. For over a decade now Lisa has owned a duplex in Boise, which she has arranged to be a nice and steady source of income that asks very little of our time. We wanted to do something similar in Salt Lake, but found the market to be hot enough that it was hard to find properties we liked that would make good investments.

On our first attempt we went to Salt Lake for a week and quickly went under contract on a fourplex. After some more traveling back and forth to the city we eventually backed away after seeing how many problems it had and how much time these would require to fix (example problems included meth contamination in some units and a rat infestation; this was in a nice neighborhood, too!). As that deal fell apart we were in Colorado having fun, and after a month away from the city we headed back to stay for a month and focus on finding a nicer place. This strategy went better. We were in an apartment just a few minutes walk from Liberty Park, one of the largest parks in Salt Lake. We went on many walks in the park, enjoying the atmosphere and attractions, especially a large aviary and duck pond. It was really nice having this little bit of nature in an urban environment, and we decided we wanted our home base to be close to this park too. This limited our options a lot, but we found a house we both really liked that was across a thoroughfare from the park. With an attractive facade, good views of the park, a nice interior layout, and a huge two story detached garage for storage and projects, it was just right for us. 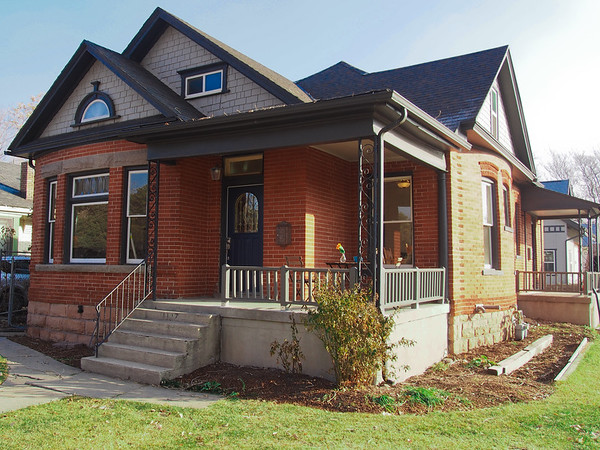 We figured that with some remodeling the house would be an appealing rental on AirBnB, and we could block out dates that we wanted the house for our own use. If AirBnB didn’t work out for whatever reason, the house was legally a duplex and by adding a second kitchen we could convert it into one and have a more traditional rental situation.

We closed on the house on Halloween. We had both gone down to the boat in San Carlos a week earlier, and Lisa flew up to Salt Lake for the closing while I sailed down to La Paz. After a couple weeks together in La Paz we flew back up to spend the holidays in the US and to work on the house. Lisa designed a new kitchen, planned a small renovation of one of the bathrooms, and listed out a lot of smaller projects to fix things up. For several weeks the house was torn up and Lisa spent her days managing the people working on the house — taking the role of a general contractor, as we didn’t have one. She was awesome at this and was able to get all this work done on a very compressed schedule. I didn’t help much at all, except for building some porch railings towards the end of the project. Instead, I went skiing a lot.

At this point I hadn’t skiied at all for nearly three years, and hadn’t done any backcountry skiing for nearly four. In late November, just days after arriving in town, it started snowing, and I went to USA Bowl, a fairly mellow south facing slope across from Solitude Resort. After skinning up nearly two thousand vertical feet I skiied several laps on the upper slopes of the bowl before returning to the car. It was wonderful.

Over the next month and a half I skiied in the cottonwoods backcountry over twenty times. I got into a rhythm: wake up at six, get to the trailhead by seven, skin and ski for five hours or so, get home by one (this let me avoid traffic in the canyons, even on weekend powder days, and be out in the cooler temperatures of the morning, when snow conditions are generally better and skinning is more pleasant). I was usually solo, and the experience became almost meditative, giving me a chance to focus and to dissociate from the hectic scrambling of much of the previous six months. A few days I went out with Lisa, but she was usually too busy with renovations; next winter we want to do a lot of low key resort skiing and backcountry touring together. 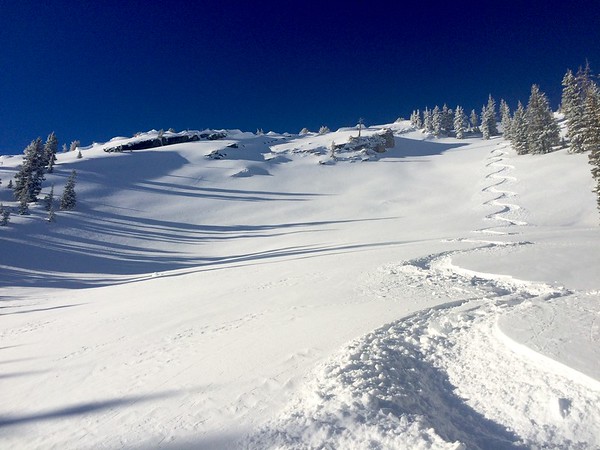 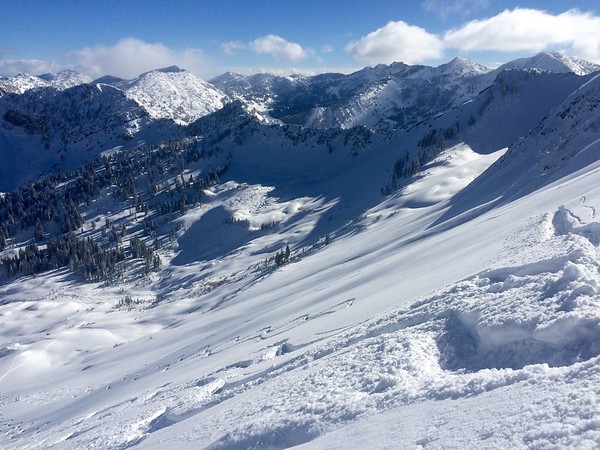 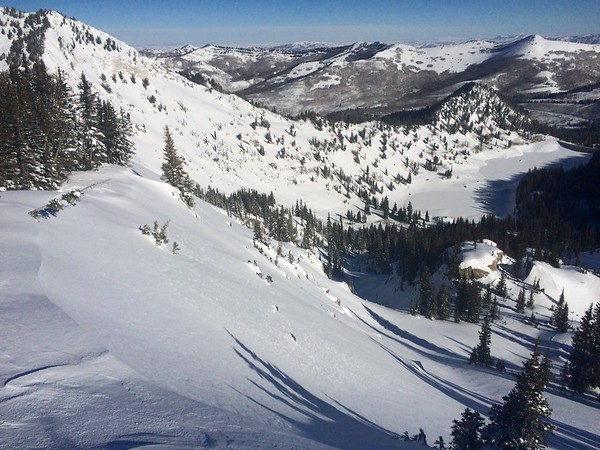 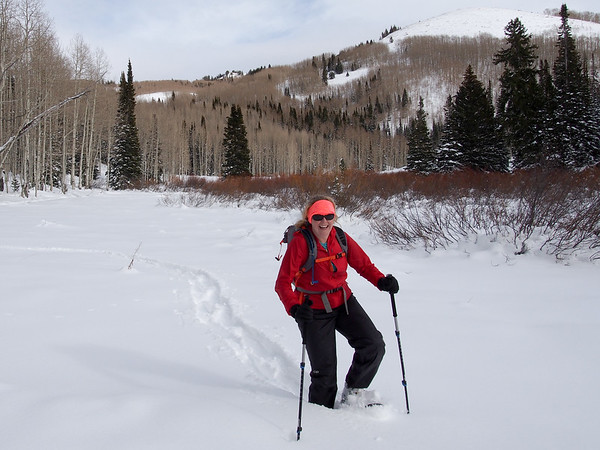 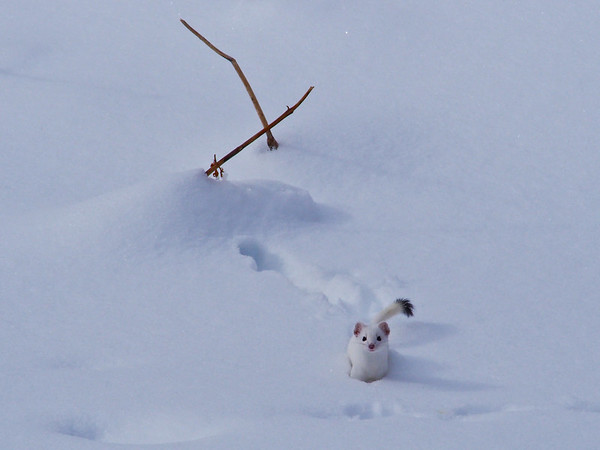 Living just half an hour away let me enjoy this skiing and still have an urban lifestyle, with plenty of time to work and shop, and to return each day to a nice warm house. It was very different, and much nicer, than the winter I spent here in my popup trailer in 2012/2013, and I’m still fascinated by the juxtaposition of this amazing winter terrain and the sprawling metropolis below. I’m looking forward to seeing more of these mountains in future winters, and especially in doing so with Lisa.

This entry was posted in Skiing. Bookmark the permalink.