After three weeks at Isla San Benedicto, returning to Cabo left me feeling like, well, a fish out of water. So much bustling civilization. Our plan at this point was to stay in the cape area through March and April, surfing, kiteboarding, diving, and working on our now substantial backlog of boat projects in La Paz. The San Benedicto trip had been so intense for me that I felt I needed time to unwind, and we left Cabo pretty quickly to head to Los Frailes, where we had spent such an enjoyable day a month prior.

We anchored right off the beach south of the main anchorage, and spent about a week. Each morning I left in the dinghy to go surfing at points to the south. I’d been craving some good surfing for months. Back in January, after northers came through La Paz I would go out to paddle surf the puny leftover waves, but this was pretty unsatisfying. Now at Los Frailes I found a nice swell and had a great time at the small breaks nearby. The swell gradually petered out as the week went on and towards the end I was getting pretty desperate, but it was still nice to scratch this itch.

Besides the surfing, things at Los Frailes were pretty relaxed. We did some jogging ashore, and a couple dives at Los Frailes proper, with poor visibility. One time we went into the nearby Cabo Pulmo marine park and did a pretty good dive, though I apparently misread the regulations on the park’s website — private diving is not allowed anywhere in the park — and we were chased off afterwards by a ranger.

We left Los Frailes at night and motored sixty miles north to Isla Cerralvo, offshore from La Ventana. Since last season we had wanted to check this island out and now was a great opportunity. We anchored near the south end in a broad, thirty foot deep sandy area. The water was clear and we looked over the side and saw a vast field of thousands of garden eels below. These eels dig burrows in high current areas and spend their time plucking plankton from the water moving by. We went diving with them to get a closer look, but they went into their burrows when we got within ten feet, and stayed put. I got an idea to rig a GoPro and leave it in the water near their burrows. After collecting footage for an hour I dove back down to retrieve it, and we found that the eels quickly accepted the camera and got back to their busy lives. I’m really interested in the idea of planting cameras at suitable places on reefs to get footage of their inhabitants, though I’m still experimenting with good ways of doing this. Lisa’s account of our garden eel encounter is here. 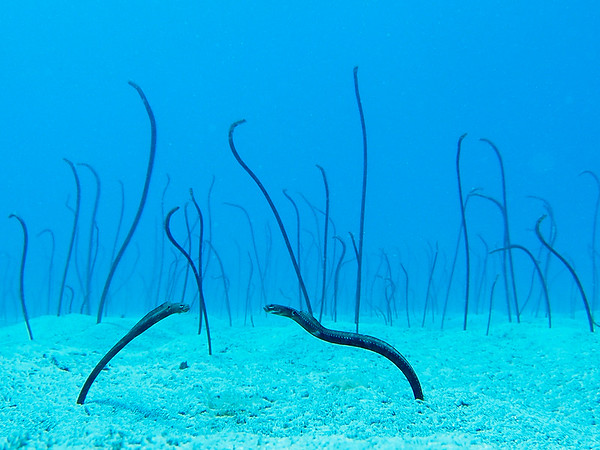 While staying at Cerralvo we did several proper dives. Off the south end of the island is Roca Montana, kind of a broad shallow shoal with lots of great coral and small fish and invertebrate life (no large fish to speak of, though, the rock was being hammered by fishing boats the entire time we were in the area). Inshore of our anchorage was more good diving, mixed coral heads and sand and a nice area for snorkeling and paddleboarding as well. 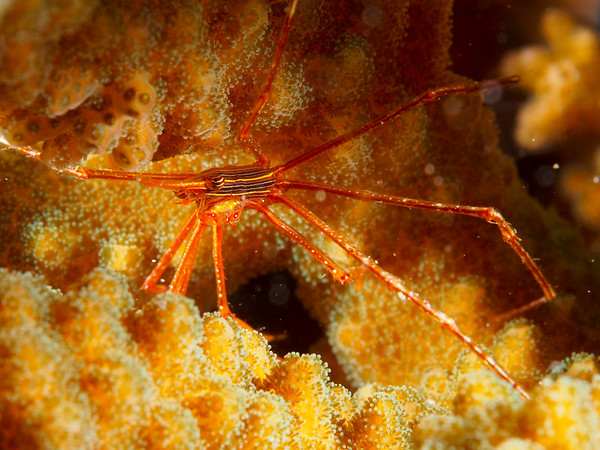 After a few days we moved on to La Ventana itself, anchoring close to town but away from the shore. After a few days of calm conditions we had several good days of wind for kiting. I started off where I left off in La Paz back in January, working on gybing a directional board — riding without my feet in straps and switching my stance on the board while turning. After a couple sessions of floundering I had a breakthrough and worked out a technique for gybing fairly reliably, though I still needed a lot more time on the water to get it dialed in. 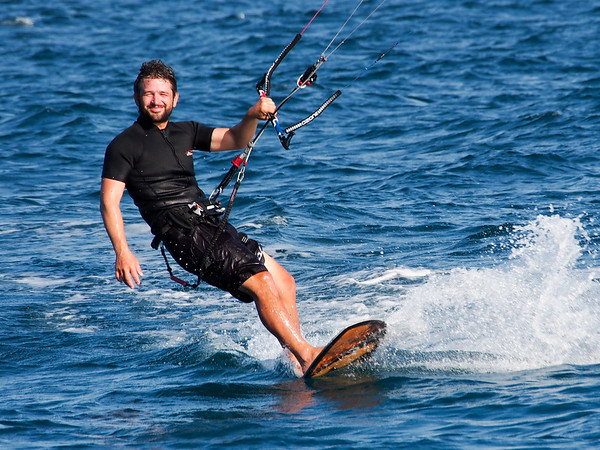 The good wind stopped and for several days there was a gentle sea breeze in the afternoon, usually around 11 or 12 knots. For my kite and board I need 13 knots to ride, and I started going stir crazy. There were a few dozen very skilled riders buzzing around in these winds, all using hydrofoil boards and foil kites — there was some sort of a race series taking place in town — and a few other folks riding hydrofoil boards with inflatable kites. I was very jealous. I’d read before how hydrofoil boards are the best way to enjoy these light wind days, but hadn’t seen it up close and so stark as this. At the end of our time in La Ventana last year I bought a hydrofoil along with the directional board, but wanted to learn the directional board first and after over a year had never even assembled the foil. It now loomed as the next big step to take with the sport.

The long afternoons with light wind left me and Lisa without much to do. We went for a few hikes ashore, spotting a good variety of birds on a great trail south of town, but after a couple weeks in La Ventana it was time to move on. Some friends from Colorado, the Brooks family, were visiting La Ribera, forty miles back towards the cape, for several days. We stopped at Cerralvo for some more diving and then headed south to visit them. 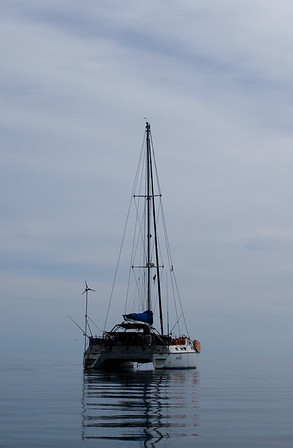 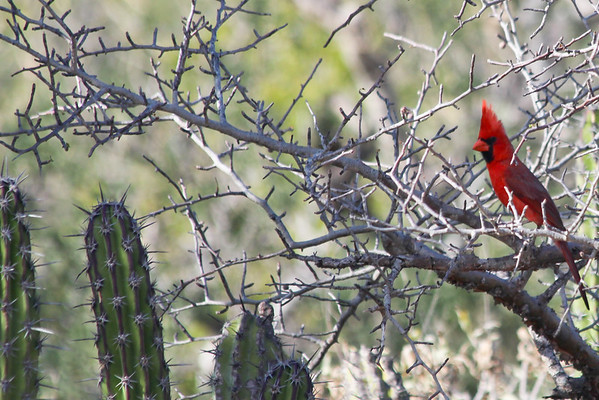 The Brooks family was renting a house on the beach, which we anchored out in front of. We had a great time visiting them, doing a couple excursions to Cabo Pulmo — a nice snorkel/hike at the south end of the bay, and a decent snorkeling trip with a local dive operator — and other activities. I did some kiting as well, and after one session the wind waves had built up pretty big and lumpy, breaking strongly both on the beach and on some bars lying just offshore. We were going to have dinner at the Brooks family’s house that night, which was concerning as we would need to get back to the boat afterwards. I hoped the waves would sit down after the wind died in the late afternoon, but after a great dinner and some drinks and coming down to the beach with a handheld spotlight in pitch darkness, the waves seemed even more intimidating. We decided to try to get out to Magic anyways.

We pushed the dinghy out through the waves, but with their size and without being able to see them well, several broke onto the dinghy and in our faces. We couldn’t get the motor started quickly, so aborted and retreated back to the beach. After a few minutes of resting and pumping water out of the dinghy we tried again, got past the surf zone and back to the boat. I don’t think there was much real danger here, but this was the scariest and most stressful thing we did the entire cruising season, and we won’t be repeating it.

The waves gradually diminished over the next couple days and we got back to having fun. The Brooks family returned to the US and we returned north, stopping again at Cerralvo for a night before leaving in the morning for a delightful sail to Playa Bonanza, at the southeast end of Espiritu Santo. For the first time ever we set up two headsails on spinnaker poles, and with the mainsail up as well had a lot of canvas out, cruising along smoothly in the calm seas.

We spent a couple nights at Playa Bonanza. The first morning a reasonably strong Corumuel wind built which I tried to go kiting in, taking out the hydrofoil board for the first time (well, besides one time in La Ventana when I tried and barely got off the beach before aborting). After some floundering — as soon as I got up on the board it would climb out of the water and I would crash — and dealing with gusts I managed to get the bar and lines tangled and had to self rescue, pulling myself to the kite, lying on top of it and slowly sailing/drifting back to the beach. Not an auspicious start to the foil.

Corumuels usually die mid-morning, and by the afternoon the sea was calm. The main reason we were at Bonanza was that one of the premiere dives in the area, the wreck of the Salvatierra, was just a few miles away. The Salvatierra was a ferry that hit a rock and sank in 1976; I dove there on a trip in 2008 but had not been back. Lisa was feeling sick so I headed to the wreck by myself in the dinghy and went exploring. Diving here was a lot of fun, great fish life all over the wreck, some nice partially enclosed areas to check out, recognizable debris of civilization like overturned tanker trucks and such. The next day Lisa was still feeling sick, so we headed south in Magic, stopping so I could dive again at the wreck before we continued on to La Paz.

Lisa arranged for us to stay at Marina de La Paz for two and a half weeks. We were here for two main reasons. First, we needed to work on our backlog of boat projects to do. Second, after spending two months away from La Paz Lisa wanted to reconnect with friends and decompress from the sailing.

I spent most of my time in La Paz working on the boat. A couple larger projects — building a fiberglass box for the compressor (now affectionately nicknamed ‘Lumpy’), remodeling and installing new shelves in one of the walk-in closets — were mixed in with a variety of smaller repair jobs. Things went alright at first, but as time went by I kept feeling worse and worse. I wasn’t seeing much of Lisa and was getting lonely, and wasn’t getting out to do sports or have much fun (other than a couple great kiting sessions later on, and some snorkeling with the whale sharks). My mind was getting jumbled and I was very sensitive to any perceived slights. We talked about things, deciding to spend more time together when we get into similar situations. I did feel better, but by the end of our stay I was pretty desperate to leave.